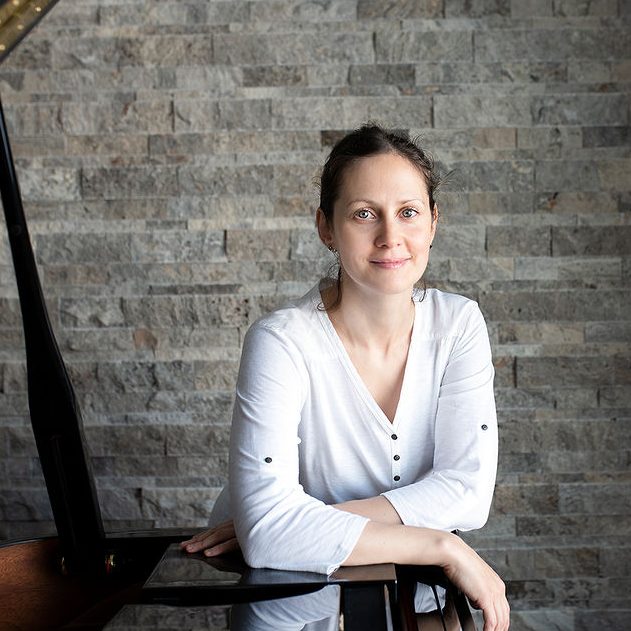 Bianca Baciu
Dr. Bianca Baciu has led an active career as performer, pedagogue, clinician and adjudicator. She teaches piano, piano literature and performance wellness at Grant MacEwan University. She is an RCM Examiner, a certified mindfulness instructor, a licensed Body Mapping educator, and a Performing Arts Medicine practitioner. Her students have received numerous performance awards locally, nationally and internationally. One of her passions is cultivating a growth mindset in students.
This user account status is Approved

Dr. Bianca Baciu has led an active career as soloist, chamber musician and pedagogue. She has performed throughout Europe and North America and has collaborated with distinguished artists such as Serban Lupu, Vagram Saradjian and Tanya Prochazka. After establishing her early career in Europe, at age 24, Dr. Baciu moved to Canada, where she has received numerous awards including the Marusia Yaworska Scholarship for the most talented musician in Canada, and the prestigious Izaak Walton Killam PhD Scholarship for research at the University of Alberta. Bianca Baciu received her Bachelor of Music in Piano Performance (2000) and a Diploma in Advanced Pedagogy (1999) from Transylvania University in Romania. She earned her Master's in Piano Performance from the University of Western Ontario (2002), and her Doctorate in Piano Performance from the University of Alberta (2006) in Canada, and has worked under the guidance of pianists such as Radu Lupu, Jacques Despres and Victor Rosenbaum. Dr. Baciu's live performances have been broadcast on CBC Radio 2 and CKUA (Canada), WDR (Koln, Germany), and Radio Romania Tineret (Romania). In 1998, she recorded her first CD featuring works by Beethoven, Brahms and Ravel, released under the patronage of the Auslandgesselschaft Nordrhein-Westfalen and The Romanian Embassy in Bonn, Germany. After moving to Canada in 2000, she completed a series of recording projects featuring solo and chamber music works by Canadian composers, and in 2006, she recorded a world premiere CD featuring piano solo works by Canadian composer Jack Behrens at the Banff Centre for the Arts. Her CD presenting Behrens's Homages for piano solo was released by Centaur Records in 2008. Dr. Baciu's book "Death of the Author - A Tribute," discussing postmodernism in Jack Behrens's piano music was also released in 2008 by VDM Publishing in Germany.Dr. Baciu has served on the ARMTA Edmonton Executive as the Artistic Director of the Northern Alberta Concerto Competition and the Young Artist liaison. She has offered numerous traveling workshops for ARMTA and APTA, and is a RCM Certified Advanced Specialist. In addition to her administrative and performance engagements, Dr. Baciu is a dedicated teacher and a sought-after clinician and adjudicator. She has taught at "Transylvania" University in Romania, the University of Western Ontario in London and the University of Alberta in Edmonton. She currently teaches piano and piano literature at Alberta College, Grant MacEwan University, and also maintains a full private teaching studio in Edmonton. Her students have received numerous awards and scholarships from the University of Western Ontario, Victoria School for the Arts in Edmonton, Edmonton Community Foundation, Conservatory Canada, ARMTA, APTA, Alberta College, Canadian Music Competition, the Kiwanis Festival and the Fall Festival in Edmonton.In 2017, Dr. Baciu received a number of grants that facilitated her extensive study of mindfulness and stress reduction in performance, which led to her certification as a mindfulness and meditation instructor. This has enabled her to bring mindfulness strategies for improved focus and concentration into her studio teaching. She is also a member of the Royal Conservatory of Music College of Examiners, a licensed Body Mapping educator and a certified Performing Arts Medicine practitioner.
Bianca’s other interests include the study of neuroplasticity and neurodiversity, ballet, yoga and world travel.